Menu
Get in touch

Business Fads and The Problem of Change

In his book Managing on the Edge, originally published in 1990, Richard T Pascale produced a chart showing the popularity of different business fads, an attempt to highlight business fad and the problem of change. Originally it was up to 1988, though it’s been updated a few times. Here’s a version that runs to 1995: 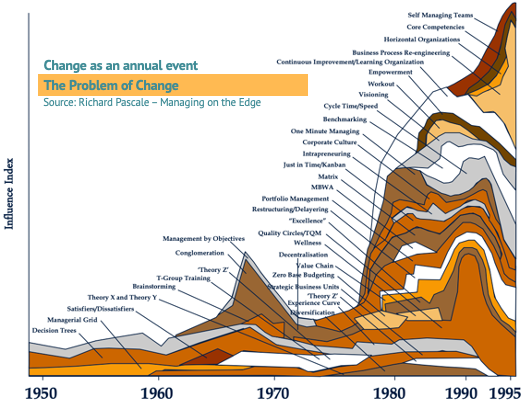 In the above, it’s clear that many methodologies that now sit under the collective noun of Agile, have, in fact, been around for much longer than that grouping allows, bearing in mind that the Agile Manifesto has “only” been around since 2001.

Pascale was measuring citation frequency in the academic literature, which is not infallible, but it does act as a reasonable barometer – a proxy, if you will, for popularity. Of course, popularity is not a measure of applicability or efficacy, but durability is. Notice how many of these fads have slipped away.

The observant reader may notice that technology project methodologies were somewhat lacking in the late 1970s. That’s not to say they didn’t exist – Dr Winston Royce documented the problems with Waterfall (without naming it such) in 1970, where he identified a number of examples of its problems – especially in relation to overruns in budget and time.

But what’s good for the goose is often good for the gander and methodologies that can work well in one environment are often more transferable than we realise. The Kanban system that Pascale’s citation searches threw up would have primarily been focussed on the work of Taiichi Ohno who introduced Kanban to Toyota for Just in Time manufacturing in the late 1940s. Ohno, based his work on observations of the Spitfire “two box” manufacturing process in the UK during World War II  that was also based on Just-in-Time delivery.

So, how has the world of management fads evolved since 1995? What’s happened to business fads and the problem of change? Well, here is a cursory glance at how Agile and Waterfall have fared in the academic literature since 2001:

The source for the above data was the Google Scholar Citations Index. The data may be different if another citations engine were used, but in any case is still a good proxy. What we can see is that Waterfall is still being written about and the academic citations that mention it have increased in number. That’s true of Kanban, SCRUM, and Agile. We can expect some overlap between Kanban and Agile and SCRUM and Agile, of course, but this is also true of Waterfall and Agile. Have a look at this search for “Waterfall Methodology” for citations from 1 Jan 2007 to 31 Dec 2007: 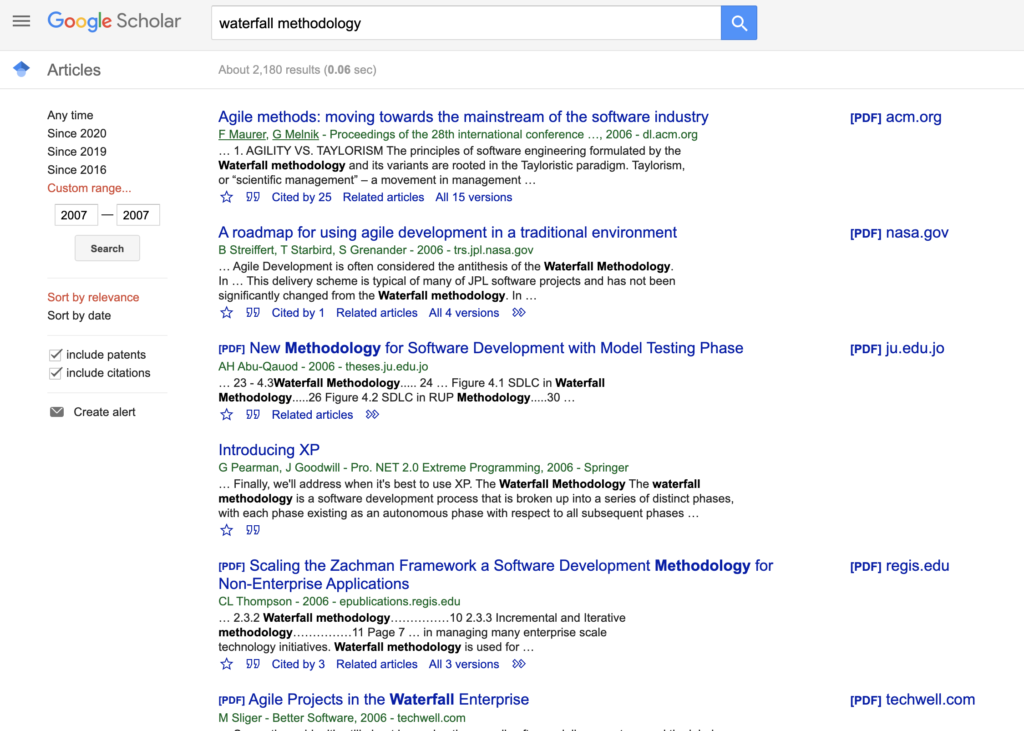 Hey presto, the results are that most of those papers referencing are, in some way, comparative. This pattern repeats throughout the years. You can try searching yourself by going to the Google Scholar Citations search page. Tip: you have to do a generic search after which you can narrow down to specific years. The results are interesting. In combination, what they tell us is that Agile has been gaining a firmer academic footing since 2001.

What about those earlier fads?

Many of the fads that Pascale identified disappeared into the aether and have not been heard of since (except as comparative sources of information). But many haven’t. A citations search is a time costly business, but here is a partial one based on some of the fads Pascale used:

The data are presented here in line chart format. The lines for Agile and Waterfall have been thickened deliberately for each of identification against other fads. No relevance should be inferred from line thickness.

A more thorough analysis of the data would be a good next step and using a different citation engine would also be useful. Another interesting exercise would be to extend Pascale’s original and maybe to frame it in terms of 1995 to 2019. It’s way too early for any data for 2020 to really be meaningful at this stage.

What does appear to show is that some older fads really get very little, if any, mention anymore, but some of the newer ones have continued to gain traction appear to be not so fickle as those of old; not so “faddy”. It’s probably too early to say that we’ve reached a consensus, but there does seem to be a bit more stability – not on how to apply a methodology, but at least on the loose frameworks within which the successful ones can be parked.

Of course, other metrics are available. Go to any business school and you’ll see a lot of case studies about firms that have risen from seemingly nowhere since 2001: Facebook, Apple, Google, Amazon. What do these companies all have in common? Well, one is that they all use Agile in some form or another. There are good reasons why leaders and executives should take time to learn more about the benefits of Agile, for them, and their teams. Get in touch if you’d like to learn more.

Finally, we’d love to hear any thoughts you might have on the above.

To define, assess, and mitigate risk take a smart approach - take the TRAMS to get to your destination.
Read more

This webinar presents methods leaders can utilise to increase the resilience of both themselves and their teams in the post-pandemic, post-Covid-19 world.
Read more

Digital Leadership Delivered, the book that explains the power of Public Cloud and Agile in ways that non-technical people in Leadership positions can consume with ease, is now available on Leanpub.
Read more

Organisational culture is the glue that enables digital maturity in the quest for digitalisation.
Read more

Digitalisation requires a different operating model to non-digital. Where do you start and how do you ensure backward compatibility? Find out in this, the fifth article on digital maturity
Read more

Agile Delivery? Why? How? What's it good for anyway? Why not just use Waterfall or rename the Project Manager to be the SCRUM Master?
Read more

DevOps isn't any one thing. If you have a DevOps team then you're already doing it wrong! Find out why and what it all really means in Part Three of the Digitalisation series.
Read more

What are Cloud Platforms? Why use Public Cloud? Is it safe? Will it save me money? Find out in Part One of the Digitalisation series.
Read more

What are Cloud Native Applications? What's the difference between those and any other application? Find out here in part 2 of the Digitalisation series.
Read more

This webinar discusses techniques for leading Financial and Technology firms during, and post-, the Covid-19 pandemic,
Read more

This webinar presents an overview on the ins and outs of running a successful Public Cloud Lighthouse Project at an Investment Bank in London.
Read more

Business Fads and The Problem of Change In his book Managing on the Edge, originally published…
Read more

New Leaders often feel overwhelmed because firms often conflate management with leadership. But Management and Leadership are not the same.
Read more

Hello and welcome to the Wicked Problems podcast. My name is Toby Corballis and I’m…
Read more

Agile Benefits for Leaders and Executives

Numerous resources are available to train Change teams in how Agile; however, little exists on the benefits for leaders and executives. One of the missions of StoryPositive is to fill the lacuna in this knowledge base. In this insight article we look at some of the benefits of shifting to Agile from a Leadership perspective.
Read more

Every year firms lose millions of dollars by leaving value on the table. Find out how to return lost value to the bottom line
Read more

The Business Benefits of Public Cloud

At StoryPositive, we approach the use of Public Cloud from the business perspective.
Read more

Made by Billie A.